Now that the U.S. elections have passed, and the Americans haven't yet peeked over the edge of the fiscal cliff, the Germans can get back to the business of discussing the euro, austerity, the fiscal responsibility of their southern neighbors, and the general future of the European Union. When the grand European project began in the wake of the Second World War, it was clear that Germany and France would have to be the core of the union. In the opening decade of the EU, Germany relished the chance to resume it’s role at the heart of Europe’s economic and political world. Indeed, the euro opened with a bang and quickly established itself as a consummately stable currency, despite the fact that cost of living pretty much instantly increased in all member states. Exports were strong, the elimination of trade barriers and international investment leading to booming economies in countries like Ireland, Spain, and later in the former Soviet territories. What lurked beneath, however, were some very key structural flaws in the common currency that have left the euro – and the Union as a political/cultural entity – where it is today: the currency remains stable against the equally fragile dollar, but it's future as the EU's common currency is quite uncertain. The Union itself, I would argue, wavers amid doubt that the differences between the countries (or perhaps regions) of Europe are just too great to reconcile. I even saw these chinks in the armor when I was living in Austria in 2006 and writing about the EU on the unfortunately now-defunct 'Stusie' blog. So if we boil it down to a nice, viscous goo, the problem in the European Union is that it is probably now too united to drop the common currency (read: boot Greece, Portugal, Italy?, Spain?) without inducing a domino-effect run on the banks of the rest of the Mediterranean, which would in turn surely send the world economy back into a spiral. On the other hand, it is not united enough to control a common currency the way it should be governed. Now, I'm no economist, but I do understand that when an economy in a given country stagnates, interest rates and a number of other currency controls can be manipulated to navigate and hopefully reverse the downturn (just as overheated economies such as China 5 years ago can be cooled). The planners of the euro – perhaps due to oversight, perhaps resulting from naivete regarding the debt boundaries set prior to the euro's debut (even the solid German economy is now hovering above the 60% of GDP debt limit set by the Maastricht Treaty) – did not foresee the fundamental differences between the member states' economies. The 2008 crisis shined a floodlight on these differences, but over time – even had the crisis not happened – this problem would have emerged anyway. In essence, with the euro pegged to the economic trends of the most 'core' members (Germany, France, the Netherlands, etc.), the rest of the countries were left powerless to react in an agile manner to the drastic effects of the downturn, or any other hypothetical financial event that may happen.

Greece has become the face of this problem in Europe, and their economic failings have been attributed (mostly by politicians) to everything from corruption in the public and private sectors, excessive pension programs, and general laziness and profligate spending. The EU's (read: Germany's) response to this problem has been to scold Greece and the other 'problem states' for the above-mentioned shortcomings, and to institute austerity measures to quell debt. In a way, I think Merkel might feel like she's in a strategically stronger position advocating austerity: if it fails, she can simply point to the Greeks' inadequate implementation of the recommended steps. However, I'd like to set aside the debate about whether one can actually 'cut' one's way out of an economic crisis (for commentary on this, see nearly any column written by Nobel Laureate economist Paul Krugman) and have a look at the cultural complications brought about by Germany's response.
As the EU (read: Angela Merkel, having 'convinced' France and 'the north' to acquiesce) redirects money toward the south in order to calm market fears about those countries' economies, the general populations of both contigents are increasingly resentful and angry with the other side. The Spaniards and Greeks wield placards depicting Merkel in Nazi garb, believing that it is the intention of the Germans to 'punish' the Greeks for their impropriety. In Germany and the rest of the 'paying' customers, an already-present-but-latent air of superiority toward the lazy and profligate South has become more and more prevalent. In my experience, the average German is not aware of many of the advantages that Germany's economy derived from having free reign in the less-developed economies in Europe, and therefore view the ECB bailouts as pure-and-simple charity given to the problem states. In effect, I think both angry groups are missing part of the story, but who can blame them for being livid about losing their livelihood/jobs/tax revenues? 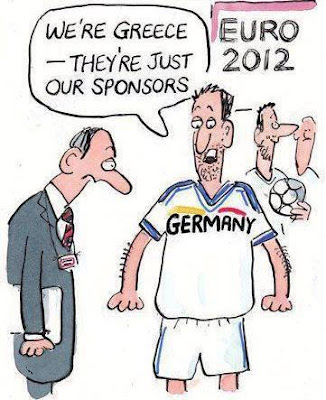 My point in all of this is that the crisis with the euro, in some sense, has served to bring all of the underlying non-economic problems to the European Union to the surface. Now that business isn't booming the way it was in the early 2000s in Europe, the South-North divide has reemerged, Great Britain has suddenly walked back its participation in the Union, and perhaps most importantly, a number of historical intra-national local/regional independence movements (the Basque/Catalonians in Spain, the Flemings in Belgium, the Scots in England, etc.) have gained huge momentum in the past couple years (watch for my next post on this topic). Though peace persists on the large scale, all is not well in the Union, and I'm here to tell you that austerity won't bestow satisfaction on the North for having taught the South a valuable lesson in fiscal responsibility. Likewise, the debt-ridden states will find no resolution of their economic woes until the underlying shortcomings of the common currency are addressed.

Update: another interesting contribution to the debate from prominent economist Joseph Stiglitz in Slate magazine.