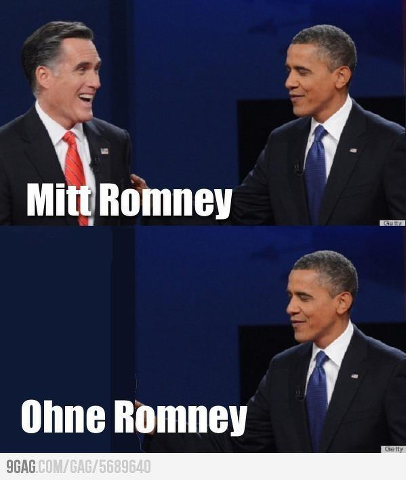 The Obama-Romney election last night was the second presidential election I have watched from abroad. The first was the ill-fated Kerry-Bush election in 2004, which I watched in a dorm room just outside Vienna, crammed in with some 25 people, every one of us with incredulous and downcast faces as we watched the results come in. Aside from our massive disappointment that four years of George W didn't convince the American people to choose an admittedly boring (but still far superior) Democratic candidate, we also knew that a solid chunk of our year of teaching English abroad would center around trying to explain to Austrian youth why the American public didn't seem to see what was even obvious to them – that Bush and co. had run the whole ship aground.

Europeans – and from my experience specifically Germans – are alternatively fascinated, disgusted, vexed and curious about our political system, and also the epic campaigns and sums of money surrounding our elections. I have observed that Germans are fascinated by the spectacle of the presidential debates and the drama stirred up by interest groups and the campaigns themselves, but they are also disgusted by the sheer sums of money wasted on negative campaign ads, frantic travel to events, and behind-the-scenes fundraisers involving the super-rich. Being a frugal people in general this comes as no surprise. Now, of course I realize that many Americans harbor the same feelings, but the Germans and most other Europeans have a point of contrast that we as Americans do not: German and European elections are extremely subdued affairs by comparison, and legally limited to very short time periods, with strict rules regarding financing, advertising, and running a campaign. They are certainly boring, but to me they seem to be a much more fair and measured method of instituting a popular democracy.

Having such boring elections, I've found that Germans really enjoy simply sitting back and watching the show unfold in the U.S. in all of its glory: the gaffes, the scandals, the ups and downs. However, this fascination is mixed with a very distinct awareness that what happens across the Atlantic will have a very real effect on their economy, their foreign policy, and their lives. Many Americans of course feel helpless voting in an electoral college system, where gerrymandering and various other obfuscations in the electoral system render the individual vote almost pointless, but imagine what it's like for Europeans: they look on from a distance without a chance to cast even a semi-pointless vote, knowing full well that the winning candidate could likely have an adverse effect on their lives.

One of the most interesting graphics that surfaced toward the end of the campaign was a 21-nation poll taken by GlobeScan, the findings of which showed that an overwhelming majority of countries – especially in Europe – would elect Obama in a landslide. German support for Obama remained steady from 2008 to 2012 at about 65 percent for Obama to just 8 percent for Romney (with the rest presumably having no opinion or being unsure). The most overwhelming support for Obama in Europe came from the French and Spanish, where just 2-3 percent supported a Romney presidency.

I found myself pondering the discussions in the U.S. media and political milieu about the shift to the right of the GOP, and thought it would be interesting to see if Europe's view of American presidential candidates had also shifted accordingly. I tried without success to find polls tracing these sentiments. Indeed, it would be incredibly interesting to see if such overwhelming majorities would have supported Jimmy Carter or Walter Mondale or Lyndon Johnson, or if Richard Nixon would have had an equally anemic following in Germany or France. In any case, Germans (and I) now often joke that their most conservative mainstream party, the CDU/CSU, has a much more progressive agenda than our liberal party on nearly all social and economic issues. They are all in full agreement that a progressive taxation system is necessary (and fair!) for the funding of very useful and important government programs providing health care, pensions and infrastructure to its citizens. In Germany, being called a 'socialist' is hardly an insult. Furthermore, it was the conservative CDU's Angela Merkel that instituted Germany's unprecedented pledge to phase out all nuclear power generation in the coming years (with the caveat of course that this move came under significant political pressure from the more progressive Grünen and the SPD).


I am optimistic and hopeful that with the re-election of Obama the U.S. and it's population is moving in a direction that will result in a more progressive, tolerant, and environmentally-friendly society, but the spectacle of the 18-plus-month-long campaign – and the fact that 3 billion dollars of largely private and anonymous campaign funding were funneled into it – is a clear indication to me that we have a long way to go before anything like Europe's progressivism could emerge as a formidable force. The U.S. might be getting less conservative, but we are still by a good margin the most conservative Western nation in the world.
Posted by Unknown at 6:16 AM