The Wind and the Windows


The Germans have a very complex relationship with air – and more specifically, moving air. If you've ever heard a German say "Es zieht," you've experienced the German's deathly fear of moving air, even when said air is quite warm, and the draft provides much-needed relief in a stuffy environment. Perhaps the most common setting to hear such an utterance is in a regional train car. Next time you're riding the RE from Munich to Salzburg on a warm, sunny summer day, try cracking several windows – especially if there are a few octogenarians present – and there's a great chance you will be scolded for endangering the health of all of those on board. I've seen otherwise immobile elderly ladies abruptly stop knitting and spring up out of their seats at the slightest hint of air disturbing the tufts of hair on their chins, thus stopping the deadly draft before it strikes. I've also seen perfectly healthy young men without a word aggressively slam shut windows that had seconds ago been opened by other equally healthy, but suffocating passengers. Once again, the Spiegel's German "Survival Bible" has stolen my thunder here in attempting to explain this phenomenon; a few readers give a great little summary of their experiences with the German aversion to drafts. My favorite part from that piece: according to one reader's wife, leading "scholars" and "doctors" claim that moving air is behind a whole set of maladies including pneumonia, flu, colds, and clogged arteries (!?), but "the biggest paradox of all is that Germans are busy walking and cycling throughout quaint little villages and busy urban streets on a daily basis." Needless to say, it seems strange that doctors and scholars would adhere to what at least seems to me to be pretty arcane ideas about how people get sick. But having read the recent book "The Ghost Map" about London's massive cholera epidemic in the 19th century, I'm tempted to think that this just might be a carryover from the days of miasma theory. Trying to explain sickness in the days before germ theory emerged, it posited that moving bodies of air carried with them nefarious diseases: "The miasmas behaved like smoke or mist, blown with air currents, wafted by winds." 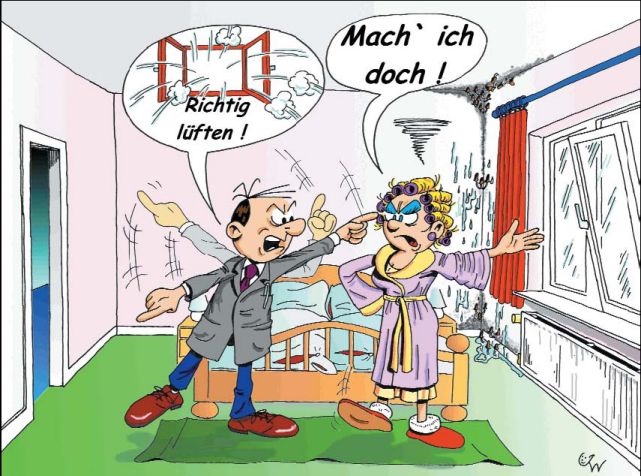 But the story of the "Wind and the Windows" gets a whole lot stranger when we introduce the idea of "Lüften" (Eng. 'ventilation, aeration'). Despite their aforementioned fear of drafts, Germans are very serious about ventilation. Many Germans lüften their apartments, houses, and other abodes on a very strict schedule, but others will sit in a room, and with just as much conviction as the octogenarian train passenger, stand up and declare that this room urgently requires ventilation. In order to properly ventilate (see graphics), the largest available window in the room must be liberally opened, and a door or window directly opposite must also be opened, thus creating a nice, steady stream of flu/cold/pneumonia/clogged artery-causing airflow. In doing so, one replaces the stale, already-been-breathed air (ABB air) that has accumulated over the previous 12-24 hours. When I've pointed out this seemingly contradictory air-maintenance behavior to my German friends, they confidently respond that drafts are "unwanted" streams of air, whereas lüften is an intentional, short-term refreshing of the air supply in a room.

Now, I would let this explanation stand – and I can totally understand the logic behind these practices in isolation – but the problem is that in my experience, the appropriate times for lüften versus draft-avoidance seem completely arbitrary. On the one hand, we must keep the hot, stuffy air inside a train car or room, but it's very necessary to completely throw open a wall of windows and the door of a university classroom during mid-winter in Berlin because the previous class spoiled the air inside (based on true events).

The best thing to come of all of this seriousness about air is that Germans have incredibly functional and high-quality windows. In fact, I would venture to say that 90% of houses and apartments that have been renovated in the past 20 years have the same 3-position system: fully closed, fully opened, and gekippt, or tilted (see above graphic again). The connection between this design and German ventilation practices became very clear when compared to the ubiquitous crank systems in the United States. This design is great for Americans who love to keep the fresh air coming all day long in the summer, but simply impractical for the German who lets the air rush in for 15-20 minutes (or kipps it for an hour while they go to the store), and then closes them again afterward. So in conclusion, form follows function in German window construction; this should not surprise us. And with that, I say: "Be safe. Be healthy. Beware the rogue draft."
Posted by Unknown at 1:39 PM